How to cite this article: Pangarkar MA. The Bethesda System for reporting cervical cytology. CytoJournal 2022;19:28.

The seminal observations of Dr. George Papanicolaou have grown, through the untiring efforts of many authors, into a universally accepted format of cytology reporting. This has helped immensely to improve the understanding of pathogenesis of cervical cancer. The insights into the complexity of interaction of the etiological and the host factors have further helped in reframing of the reporting system. The Bethesda System (TBS) stands out as a model of standardized reporting in cervicovaginal cytology. Apart from its reproducibility, it reflects the most current understanding of cervical cancer. The most important feature is its clinical relevance. Each category of this classification has clear clinical implications, which are based on solid evidence and worldwide consensus. Moreover, the authors have tried to keep it updated through continuous revisions, incorporating the technological and scientific advances. The component of specimen adequacy reflects the importance it has given to the quality assurance of the laboratory preparation. The minimization of categories, simple terminology, and the supporting image atlas – both in the print form and the web-based form, have made TBS an exemplary teaching-learning resource. The wide accessibility of TBS has been the most important factor in being adopted by a majority of pathology community all over the world. 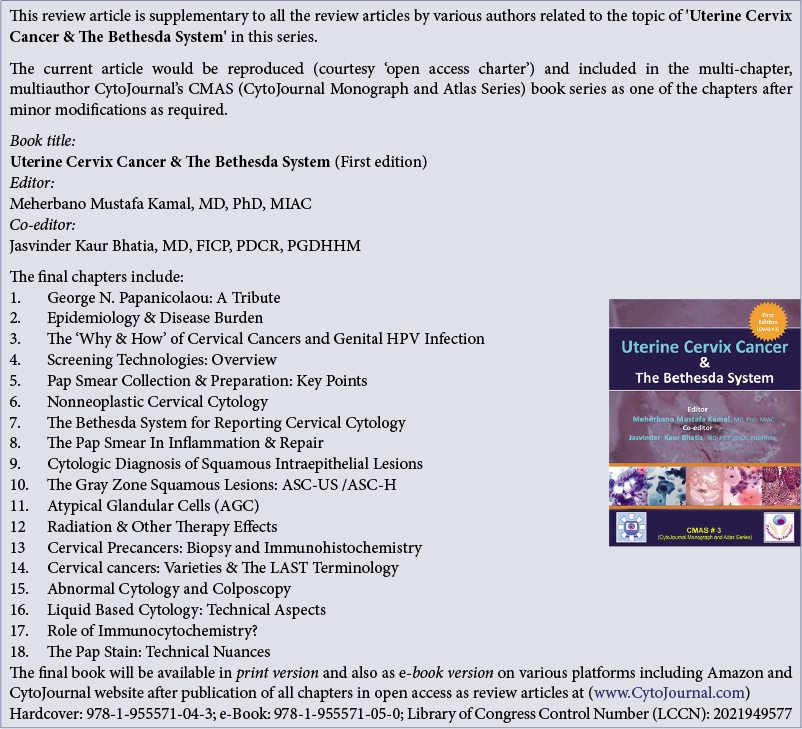 Papanicolaou introduced cervical cytology to the world. His landmark publication in collaboration with H. F. Traut “Diagnosis of Uterine Cancer by the Vaginal Smear” in 1943 paved the way to diagnose uterine cervical lesions with the help of a simple and effective method.[1]

Then, in 1951, Ayre first described and illustrated squamous epithelial cells with a perinuclear “halo” in smears of the uterine cervix.[2] Then, Richart in 1966 introduced the cervical intraepithelial neoplasia (CIN) classification with CIN I, CIN II, and CIN III based on the tissue architecture.[3]

As the knowledge of cervical carcinogenesis improved, it became imperative to unify the different terminologies and to effectively communicate with the clinicians so as to optimize the management of patients. Thus, a meeting was convened with experts from all over the world at National Institutes of Health in Bethesda, Maryland, USA, in 1988. As an outcome of this workshop, the TBS reporting for cervical cytology was introduced in 1991 to provide uniform system of terminology for reporting with clear guidelines for the management of these lesions.[4]

The first edition of TBS introduced the term squamous intraepithelial lesion (SIL) – as a potential precancerous lesion, which is characterized by a high spontaneous regression rate and the lack of predictable progression of SIL to invasive cancer. The Bethesda System (TBS) replaced three levels of CIN with two levels, low-grade SIL (LSIL) and high-grade SIL (HSIL), which could be used to describe any squamous abnormality of the lower genital tract.[4]

The evolution of scientific knowledge, technological advances, and corresponding changes in clinical management of cervical cancer and its precursor lesions has entailed revisions in TBS over a period of time. Two workshops were conducted in 1991 and in 2001, respectively, and two editions of the Bethesda atlas were published in 1994 and 2004 as an outcome of these workshops. TBS has helped in standardization of terminology for Pap smears, has initiated significant research in the biology and cost-effective management for human papillomavirus (HPV)-associated ano-genital lesions, and also led to a uniform worldwide recommendation of clinical management for these lesions.[5]

The latest revision has been done in 2014 with the help of an appointed task force. This group of renowned cytopathologists conducted an internet-based open comments survey with participation from the international cytopathologist community. The feedback was compiled, reviewed, and resulted in the 2014 edition of TBS and its accompanying atlas.

Throughout this period, three guiding principles have been followed by TBS:

The system has five components of a Pap smear report – specimen type, adequacy, general category, interpretation, and adjunctive testing. Two additional components may be added where applicable – computer-assisted interpretation of Pap smear and educational notes and comments appended to the cytology report.

NILM when there is no cellular evidence of neoplasia, this term should be stated in the general categorization section or in interpretation/result section of the report – whether or not there are organisms or other non-neoplastic findings.

Endometrial cells (in a woman >45 years of age), (specify if negative for SIL).

A brief explanation about the adequate smear and normal physiological cytology findings is given below.

Any smear with abnormal cells is by definition satisfactory for evaluation.

In both conventional and LBC preparations, a minimum threshold of 5000 cells is generally accepted as adequate cellularity but can be lowered to 2000 cells in atrophic, post-hysterectomy (vaginal vault), and post-therapy smears. Normal cellularity is usually 8000–20,000 cells.

A rough guide to estimate the number of cells.

Conventional smear – compare with “reference images.” If a reference image has 1000 cells in a 4× field, the smear should have at least eight such fields to estimate the cellularity as 8000 cells.

In both conventional and LBC preparations, an adequate TZ sample needs at least 10 well-preserved endocervical/ squamous metaplastic cells, singly, or in clusters.

Obscuring substances such as inflammatory exudates, blood, or lubricants may be stated in the report in conventional smears, they usually do not cause a problem in LBC smears.

This category includes normal cells and reactive responses of the epithelial cells to inflammation, specific infective organisms, as well as hormone levels. TBS states that reporting these specific findings is optional. However, in the Indian context, this category forms the majority of Pap smear reports. Furthermore, most of these patients are symptomatic and they can be offered specific diagnoses as well as treatment. Thus, a strong case is to be made for specific mention of the findings in this category, so as to realize the full potential of the Pap test.

It indicates ongoing response to noxious stimuli. Important because of D/D with HSIL/ASC-H.

Importance depends on nuclear features. If nuclei are pyknotic – it is usually a reactive process, rarely may hide an underlying malignancy. If nuclei are enlarged/pleomorphic – indicate HPV infection or malignancy.

It may be mistaken for endocervical neoplasia.

It can be seen in squamous, columnar, or metaplastic epithelium. This remains the most common category of interobserver variation. Criteria are somewhat subjective. Usually, cells are seen in groups/sheets. It indicates a trauma followed by reparative process.

Patients who have received radiotherapy for carcinoma cervix or rarely for other malignancies can be monitored for recurrence by Pap smear. These changes resemble dysplastic changes and may persist indefinitely. Important to differentiate from viable malignant cells which indicate non-response or relapse of malignancy.

Exfoliated glandular cells may show changes resembling adenocarcinoma. Furthermore, 25% of cases may be associated with Actinomyces infection. Removal of IUD and follow-up is recommended.

A separate chapter on adjunctive testing has been added to reflect the advances in HPV testing methods and immunocytochemistry methods.

Automation in cervical cytology screening has led to introduction of “location-guided screening” devices. A chapter titled “computer-assisted interpretation” provides an overview of current systems in this field.

The use of educational notes and comments as a part of the Pap smear report is optional. An entire chapter discusses the use of comments and it is recommended that these comments should be clear, concise and should be based on evidence. A new chapter on risk assessment in cervical cancer is a valuable addition which discusses the impact of cervical cytology report on the patient management.

The Bethesda Interobserver Reproducibility Study II reemphasizes the degree of interobserver and interlaboratory variability in cervical cytology and histology interpretation. Future editions of TBS await the results of this ongoing study. The accompanying Bethesda 2014 Web Atlas is an invaluable tool for all students and practitioners of cervical cytology reporting. Its universal and easy accessibility has helped all cytologists to improve their quality of reporting.[7]

TBS for reporting cervical cytology is designed and focused to detect and treat precursor lesions of the cervical carcinoma as part of a population screening program. In terms of absolute numbers, Indian women bear the greatest burden of the disease as more than a quarter of new cases and cervical cancer deaths in the world occur in India alone.[8,9]

However, in low-resource settings, like those in India and other developing countries, Pap smear screening programs are not widely available and Pap smears are taken whenever patients present with gynecological complaints in the outpatient departments of public and private hospitals. Hence, Pap smear forms an integral part of the comprehensive health care of women in India and other similar countries.

Symptomatically, most of the patients present with leukorrhea, low backache, pain in abdomen, irregular bleeding, dyspareunia, etc. Thus, many conditions such as infections, inflammation, repair, and malnutrition including folic acid deficiency are detected on a cervical smear besides the occasional epithelial abnormalities and carcinomas.

The diagnosis and consequent treatment of all these conditions forms a large proportion of Pap smear indications besides the detection of SIL and carcinoma.

TBS has succeeded in achieving a lot toward reporting on cervical cytology till date. TBS offers a systematic way of reporting a cervical scrape smear and also gives the treating physician a consultation about the treatment strategies. It has led to the standardization of reports and facilitated the collection and analysis of data across laboratories worldwide.

TBS 2014 is accompanied by Bethesda 2014 Web Atlas which offers a high-quality educational resource for all interested students. In keeping with the technological advances, TBS 2014 has 2 chapters-chapter 9: Adjunctive Testing and Chapter 10: Computer-Assisted Interpretation which help the students familiarize themselves with the latest developments in diagnostic and management practices.[7]

The TBS task force is committed to periodic appraisal and updation of this system.